The first test performed was the average gearbox load capacity test, which measures the amount of load applied to the gearbox before it begins to “growl” or make noise, signaling the point at which extreme gear wear begins.

¹The average gearbox load capacity measures the amount of load applied to the gearbox up to the point where extreme wear begins.
​Average Accelerated Gearbox Life​

The next test performed was the average accelerated gearbox life test. This test approximates the life of the gears under a constant overload condition. Average life is calculated from gear wear resulting from the test. The Reinke-UMC® 740-U-AD™ 10/16 gearbox significantly outperformed its predecessor and experienced roughly half the amount of gear wear compared to its 8000 model competitor under the same test conditions.

Remaining cool under pressure, the Reinke-UMC® 740-U-AD™ 10/16 gearbox also operated 15 degrees cooler on average during the average accelerated gearbox life test, indicating that more of its energy is being channeled into moving your irrigation system — rather than producing excess heat.​
Best wheel gearbox warranty of 10 years or 16,000 hours. 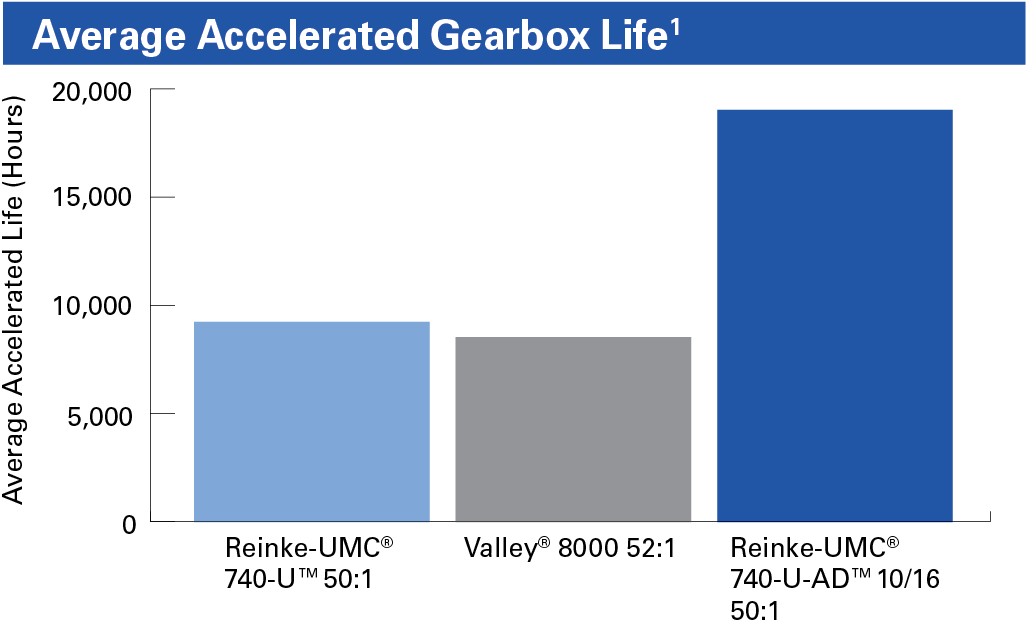 ¹The average accelerated life approximates the life of the gears under a constant overload condition.  Average life is calculated from gear wear resulting from the test.
The superior performance of the Reinke-UMC® 740-U-AD™ 10/16 gearbox in terms of load capacity and life is why only Reinke can offer the best wheel gearbox warranty in the industry of 10 years or 16,000 hours.

Are you eager to learn more? We thought so.
​
Your local Certified Reinke Dealers are here to help.  You can call or just stop by, and they’ll discuss the product and warranty with you in person.
UMC®, 740-U™ and 740-U-AD™ are trademarks of Universal Motion Components Co., Inc.  Multiple Reinke-UMC® 740-U™ and Reinke-UMC® 740-U-AD™ 10/16 gearboxes were tested  against multiple Valley® 8000 gearboxes.  Tests were performed in a head-to-head comparison, in a controlled environment and in a standard manner to ensure an accurate comparison. The accelerated life shown in the graph does not reflect expected life in the field. Valley® is a registered trademark of Valmont Industries, Inc.
© 2018 REINKE MANUFACTURING CO., INC.
ALL RIGHTS RESERVED