Subscribe to our email newsletter!
Corn is an important crop for the United States economy. In 2018, U.S. growers produced more than 14.42 billion bushels. According to the National Corn Growers Association, the highest percentage of that corn goes to the ethanol industry, with livestock feed following close behind.
​More than 89 million acres were planted throughout the country in 2018 with Iowa leading in corn production, followed by Illinois and Nebraska.
Proper irrigation helps these producers harvest high yields to fuel local industries.

“If you know how much water is in the soil and how much the crop is using each day with the ET number, then you can do a really good job of scheduling irrigation for whatever crop you’re irrigating,” Ingram said.

ET, or evapotranspiration, is a measure of how much water is transpired by the plant and evaporated from the soil.
Corn Plant Development and Water Stress
Like any crop, corn has a predictable wateruse cycle that follows the plant’s growth cycle. Depending on weather and ET variables, actual water usage varies from year to year.

Corn is most vulnerable to water stress in the early reproductive phases. A single water stress event in the period between tasseling and blister can result in a 30% to 40% yield reduction in a dry year (Irmak & Rudnick, 2014).

Silking occurs just days after tasseling and is identified by corn silk on the outside of husks. The silk captures falling pollen grains, which grow down the silk. Effects of water stress in this period include delay in tassel emergence, silk growth or elongation and dry silks. All of these conditions lead to reduced pollination.

The second most critical period for water stress is the early vegetative stages, prior to tasseling. Corn requires less water during the grain-filling period from milk to maturity.
Irrigation Scheduling
The goal of irrigation scheduling is to estimate the amount of available water in the crop root zone and prevent the crop from experiencing water stress. Soil texture and water-holding capacity as well as croprooting depth affect the amount of water available to the plant.

In fields where soil textures vary, applying uniform irrigation can result in overwatering of fine-textured areas or underwatering of coarse-textured areas. An alternative is to use variable rate irrigation (VRI). With this method, mapped field data can be used to determine factors relating to waterholding capacity and yield productivity, and specify optimum locations for soil moisture monitoring. Irrigation prescriptions can then be created for specific zones within a field.

​As corn develops, its root system deepens and eventually reaches approximately 5 to 6 feet. However, corn plants extract more water from the shallow depths and less from the deeper depths. According to the 4-3-2-1 rule, corn plants draw 40% of their water from the top quarter of the root
zone, 30% from second quarter, and so on. In general, a root depth of 3 feet can be assumed until the last irrigation application, when the assumed depth is increased to 4 feet (Kranz et al., 2008).

Placing soil moisture sensors at various depths within the crop root zone can provide precise readings of current soil moisture. To keep the soil moisture within an acceptable range, growers must replace the amount of water that is evaporated from the soil and transpired by the plant, or ET.

ET data can be obtained from a subscription service or local media. ET changes depend on plant development stages and weather variables such as solar radiation, wind, air temperature and humidity.

Irrigation scheduling can be compared to a checkbook where rainfall and irrigation are deposits and ET is a daily withdrawal (Melvin & Yonts, 2009). Like other weather data, ET is forecasted to help growers predict and schedule irrigation.

When precipitation is more or less abundant than expected, growers must alter their irrigation schedule. According to Karla Noble, Irrigation Manager at Plains Equipment Group in York, Nebraska, many growers are turning to remote monitoring technology.

“Moisture probes and remote communication are proving to be great technologies for farmers,” she said. “They can see how much water is needed and change the application rate. They can do it immediately, away from the farm, instead of having to wait until they get back and losing
critical irrigation hours.”
As corn approaches maturity, plant water usage drops. A final irrigation run once corn reaches maturity may or may not be needed depending on soil and weather conditions. When predicting the last irrigation of the season, growers should consider predicted crop maturity date, predicted water use, remaining available water in the soil and the predicted rainfall before crop maturity (Yonts, Melvin, & Eisenhauer, 2008).

“It’s so easy to go out and push that button; some growers will put on another 1 to 2 inches at the end of the season as an insurance policy, but there can be a yield penalty,” Ingram said. 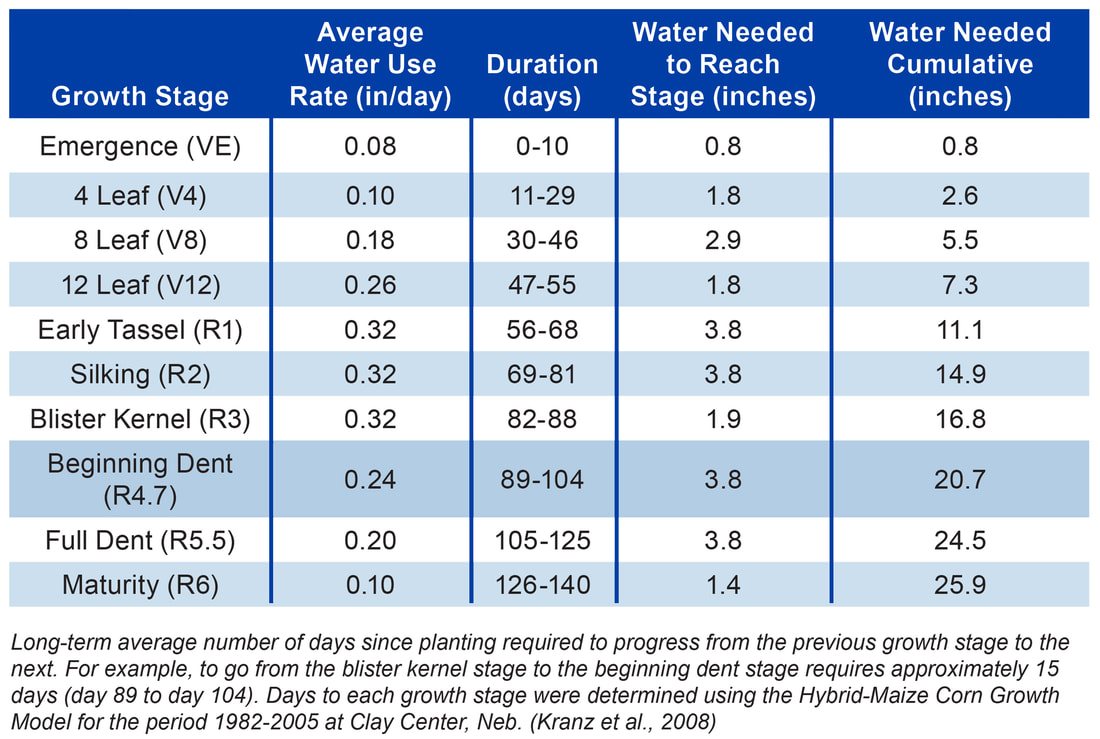 Whether corn producers choose the most precise, cutting-edge methods of irrigation scheduling or irrigate solely based on environmental observation and known crop data, production outcomes generally will outperform unirrigated acres.

Center pivot systems are a good choice because they generally have one of the lowest per-acre installation costs, are easy to operate and are energy efficient because they operate at low pressure. Reinke dealers can recommend specific irrigations systems to fit individual fields. The Reinke brand provides a variety of VRI solutions for all kinds of budgets. ReinCloud®, Reinke’s remote monitoring system, allows you to see real-time sensor data and control your pivot(s) from your smartphone, tablet or computer. Reinke dealers also can retrofit remote control technology on any brand of irrigation system. Find a Reinke dealer near you at www.reinke.com/find-a-dealer.html.
References
© 2021 REINKE MANUFACTURING CO., INC.
ALL RIGHTS RESERVED