Subscribe to our email newsletter!
Irrigation and Plant Growth Cycle
Planting to first square:
Irrigation is generally not needed from planting to emergence. In arid regions, preplanting irrigation may be needed to create a soil water balance that supports germination.  Irrigation directly after planting lowers the soil temperature, which may cause seedling diseases. After germination seedlings develop roots. Some water deficit at this time can encourage deeper root growth.​
First square to first flower:
During this three-week period, potential fruiting sites, called squares, are developing. Plant growth is very rapid.  Irrigation should be used to supplement rainfall and maintain available water balance. It is important to provide enough available water to prevent wilting. Once a plant shows signs of wilt, physiological stress already has caused lack of yield potential. (UGA, 2016)
First flower to peak bloom:
The cotton crop’s water needs to increase as it blooms and peaks during the third and fourth weeks of bloom. Extreme lack of water at this time can cause short staples, higher micronaires and negatively impact fiber quality. More mild water stress can cause a reduced number of squares and shedding of young bolls, which results in lost yield potential.
Peak bloom to open bolls:
After the fourth week of bloom, water needs to decrease. The decision on when to terminate irrigation can be difficult. When bolls begin to open, one final irrigation can be applied. When a noticeable number of bolls have opened, particularly harvestable bolls on lower plant nodes, irrigation should be terminated. As a general rule, irrigation should cease at 10 percent open boll (UGA, 2016). This helps prevent loss of fiber quality.
Irrigation Scheduling and Management
There are several ways to determine and manage cotton crop water needs. One way is to calculate evapotranspiration, ET. The amount of water transpired by plant and evaporated from soil equals ET, and that amount should be replaced by irrigation (Cotton Incorporated, n.d.). As the plant
grows, foliage becomes denser and leaf area increases, which leads to more transpiration and increased irrigation needs. ET is a function of many variables including solar radiation, wind, air temperature and humidity.

​The checkbook irrigation method compares irrigation to balancing a checkbook, where the soil is the bank account and water is added or taken away. Rain and irrigation are deposits, while water used by the crop and water evaporated from the soil are withdrawals. The checkbook method can be used with sensors, or estimated with environmental observation and hand sampling of the soil (Melvin & Yonts, 2009). The goal is to estimate the amount of available water in the crop root zone and keep that amount congruent with the crop’s needs throughout its growth cycle. Using formulas and coefficients, the checkbook method can help growers determine when and how much to irrigate.

Soil texture:
In the U.S. Cotton Belt, which centers over Georgia, Alabama and Mississippi, soils range from sandy, such as the Tifton soil in Georgia, to silt, like the Natchez soil profile found near the Mississippi Delta (USDA).  Silt and clay are fine-textured soils and hold more water than coarse-textured soils such as sand. Sandy soils require more frequent irrigation (Melvin, 2009).

In fields where soil textures vary, farmers using one minimum balance for an entire field will need to decide to either over water finer textured areas or under water coarser textured areas. An alternative is to use variable rate irrigation (VRI). With this method, mapped field data can be used to determine factors related to waterholding capacity, yield productivity and specify optimum locations for soil moisture monitoring. Irrigation prescriptions then can be created for specific zones within a field. Reinke Manufacturing offers a variety of VRI solutions for all kinds of budgets, from sector VRI that segments the pivot path into pie-like sectors, to the combination of sector and zone VRI, which allows more than 300,000 independently managed zones within the field. 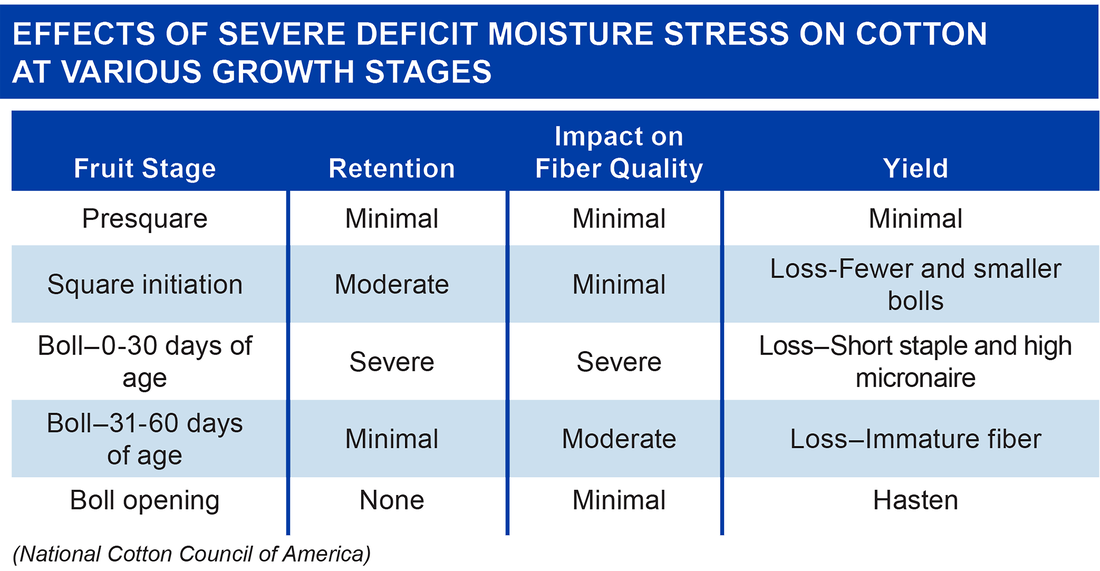 Root depth:
In the absence of compaction or other root-restricting layers in the soil profile, cotton roots can reach great depths; however, the bulk of the root system is located in the upper 3 feet (NCCA). This area is considered the crop root zone. The depth of the active root zone increases as the plant
matures.
Sensor use:
A soil moisture sensor can provide readings of soil moisture content or soil water tension in the root zone and can alert the grower in near-real time when water is needed.  Sensors provide live readings of current crop water status, while other methods are just estimates. When partnered with
a sound irrigation strategy, soil moisture sensors will provide the highest yield level.  (UGA, 2016).  Irrigation varies depending on rainfall, region, soil conditions and other variables. The ability to time irrigation events to occur precisely when crops need water helps put growers in control
and reach maximum yield potential. Jerry Smith, a Reinke dealer in Denmark, South Carolina, researched several brands before starting his Reinke dealership in the late 1970s.

​"I wanted a system that would last. I just now replaced one of the first systems I first sold 40 years ago.”