Subscribe to our email newsletter!
Hemp Farming Industry Development
​​The Agriculture Improvement Act of 2018 makes growing industrial hemp, defined as cannabis with a THC level below 0.3%, legal at the federal level. THC, or tetrahydrocannabinol, is the psychoactive compound found in marijuana and other types of cannabis.

Industrial hemp is often cultivated for a non-psychoactive cannabinoid called cannabidiol or CBD. It is also grown for its fiber and seed, which can be used in a variety of products.

Kentucky Department of Agriculture’s Industrial Hemp Research Pilot Program has been active since 2014.  Growers attend a certification class to
obtain a license to grow hemp. KDA tests their crops’ THC levels before harvest to ensure compliance with the 0.3% threshold. Regulations have not discouraged the many growers who are looking to gain a foothold in a new industry. In 2019, KDA approved 978 growers to grow up to 60,000 acres of hemp, 24,900 of which were actually harvested (KDA, 2020).

​Kyle Murdock, a Certified Reinke Dealer in Murray, Kentucky, sold five center pivots for a hemp cultivation operation. Many others have visited his dealership to price pipe and other irrigation components. A HempWood manufacturing plant, which processes hemp fiber into a wood-like material, was built in Murray, Kentucky, in 2019. In the nearby town of Mayfield, construction began on a CBD processing plant.

Although Murdock has seen some operations that use hard hose irrigation, he recommends center pivots.

“Pivots have less impact on the plant than the hard hose; this is especially important when the hemp is flowering,” he said. “On my own farm, 85-90 percent of the hemp will be under pivots. Timeliness is also an advantage. With a pivot you can put on 2/10 of an inch every day if you want. With a hard hose, 10-15 acres a day is the most you can cover — it’s not as efficient and it’s more labor intensive.”
Hemp Irrigation Research
The idea that hemp is a good drought crop and requires little nutrient input is an incorrect designation. Research has proven the need for irrigation and fertilization. Exact amounts will vary depending on region and hemp variety.

Purdue University research (2015) suggests hemp needs 25-30 inches of combined rainfall and irrigation per season. Baxter (2000) suggests 12-16 inches. Much of the difference in findings can be attributed to climate differences between Indiana where Purdue is located and Ontario, Canada, where the Baxter study was conducted.

In 2015-2016, a Colorado State University researcher found that irrigated hemp produced nearly three times more seed than non-irrigated hemp (Hemp Industry Daily, 2018). ​
Brian Campbell, a doctoral student in soil and crop sciences, grew two test plots in northern Colorado. He irrigated one plot consistently; the other plot received only about 8 inches of rainfall throughout the growing season.  The irrigated plot produced an average of 1,100 pounds of seeds per acre, while the non-irrigated plot produced about 400 pounds per acre. Campbell’s research led him to conclude that hemp’s water use is high compared to other crops.

“You should irrigate your hemp plants if you want them to do well in Colorado,” said Campbell (Hemp Industry Daily, 2018, para. 5).
Irrigation Scheduling
Like any crop, hemp has a predictable water-use cycle that follows the plant’s growth cycle. Good soil moisture is needed for seed germination. Plenty of rainfall or irrigation is needed for good growth, especially during the first six weeks for establishment (Purdue University, 2015). Most
plants also need more water during reproductive phases, and hemp is no exception. In Ontario, about half the crop’s total water use for the season
occurs during flowering and seed set (Baxter, 2000). Drought during this stage reduces seed set and produces poorly developed grain heads.

The availability of data for hemp varies depending on region. When scheduling irrigation, growers need to consider the same factors as they would for other crops. The amount of water used by the crop and evaporated from the soil, known as evapotranspiration (ET) needs to be replaced by either irrigation or rainfall.

​Local media or agricultural authorities often forecast ET numbers for various crops in specific regions. The ET number tells growers how much water is needed to replenish soil moisture. However, ET numbers may not be available in areas that have only recently allowed hemp farming. Using soil moisture sensors can provide growers with accurate live data from their own fields. 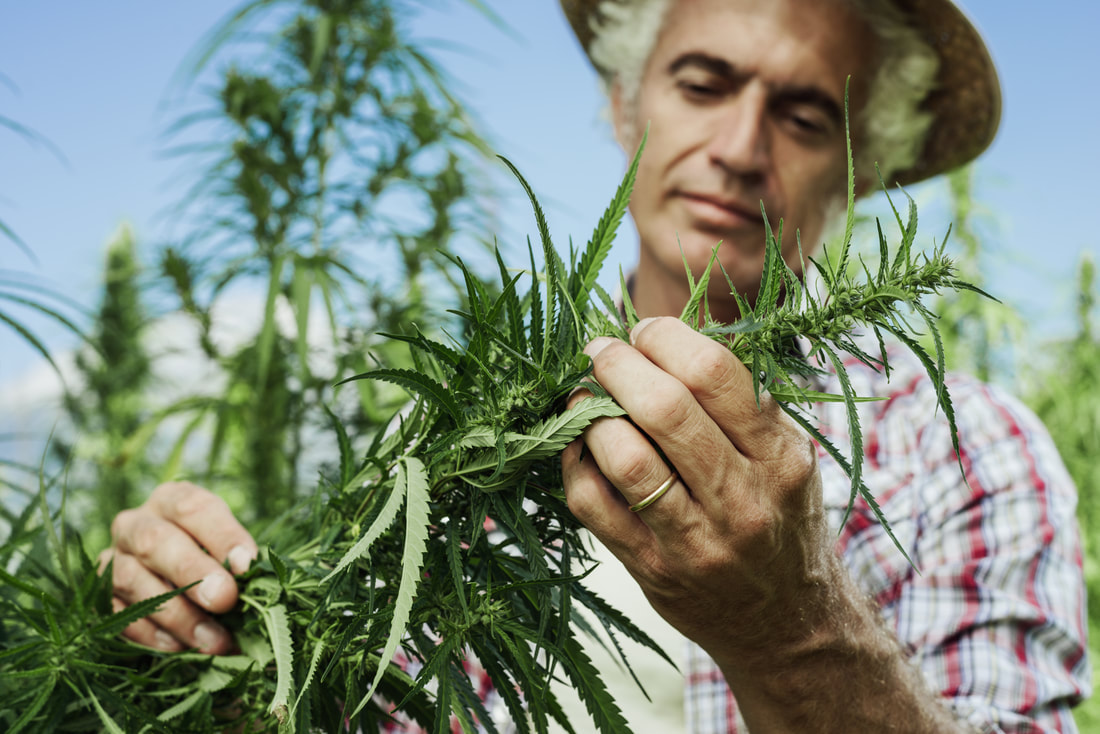 When using soil moisture probes, growers should determine the ideal soil moisture range and irrigate as much as necessary to keep their soil
within the acceptable range.

​Another consideration is the depth of the active root zone. According to
Baxter (2000) fiber hemp varieties have a relatively shallow taproot that
reaches less than a foot deep. If using soil moisture sensors, probes should be placed at various depths within the root zone.

Center pivot systems are a good choice, they generally have one of the lowest per-acre installation costs, are easy to operate and are energy efficient because they operate at low pressure.  Additionally, center pivots allow growers to irrigate more frequently and cause less damage to hemp crops, than hard hose irrigation. Hemp often requires
high nutrient input. Growers can fertilize through center pivots to provide their crop with an even nutrient application.