Subscribe to our email newsletter!
Peanut Growth Stages:
Prebloom/Bloom
Peanut seeds must absorb 50 percent of their weight in water before germination can begin, so soil should be kept moist. After germination,
vegetative growth begins and lasts for approximately 25 to 40 days. Blooms appear next, which signal the plant has reached its reproductive phase. Water stress at bloom can delay formation of flowers, extreme water stress can completely inhibit blooming (Lee & Lemon).

Kernel Fill/Maturity
After approximately 105 days, limited growth occurs. The peanut crop’s water requirements reduce. However, irrigation still may be applied on an as needed basis. Dry weather promotes the development of spider mites as well as a fungus, Aspergillus flavus, which causes aflatoxin contamination. Irrigation can help negate these blights.

Many farmers use rough estimates of crop water needs to schedule irrigation. Figure 1 illustrates an estimate of water requirements throughout the peanut growth cycle based on historical data in Georgia, with a total seasonal requirement of 23 inches. If rainfall occurs, producers simply subtract rainfall received from the weekly water requirement.
Irrigation Scheduling & Management
There are several more precise ways to determine and manage peanut water needs. Most calculations require a measurement of evapotranspiration, ET. The amount of water transpired by plant and evaporated from soil equals ET, and that amount should be replaced by irrigation. ET is a function of many variables including solar radiation, wind, air temperature and humidity.

The checkbook irrigation method compares irrigation to balancing a checkbook, where the soil is the bank account and water is added or taken away. Rain and irrigation are deposits, while water used by the crop and water evaporated from the soil are withdrawals. The checkbook method can be used with sensors, or estimated with environmental observation and hand sampling of the soil (Melvin & Yonts, 2009). The goal is to estimate the amount of available water in the crop root zone and keep that amount congruent with the crop’s needs throughout its growth cycle.
Using formulas and coefficients, the checkbook method can help growers determine when and how much to irrigate. 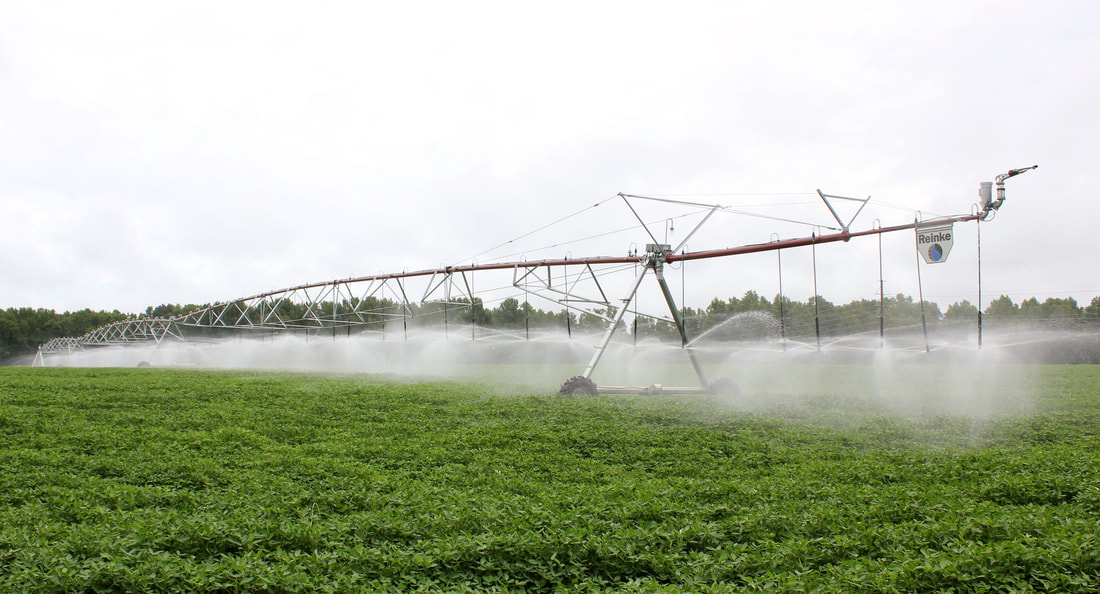 Current Soil Water Balance:
This is determined by using soil water sensors or hand-feel soil sampling. It determines a starting point for the checkbook method. This
measurement should be taken every few weeks. If changes occur, the most recent soil water balance should be used.

Minimum Balance:
The minimum balance refers to the lowest soil water content the soil should be allowed to have and is set by a management decision. This
balance should be set high enough to prevent plants from experiencing water stress.

Soil texture:
Texture and water-holding capacity of soils vary depending on region. Peanuts grow best in well-drained sandy to sandy loam soil. Saline soils
and soils with more than 20 percent clay of rocks will inhibit growth and harvest. (Department of Agriculture Forestry and Fisheries, 2010). Coursetextured or sandy soils hold less water than fine-textures soils such as silt and loam, so sandy soils require more frequent irrigation.

Root depth:
Peanut rooting depth ranges from 1.6 to 3.3 feet (Smith, 2006). This area is considered the crop root zone. The depth of the active root zone increases as the plant matures. Peanuts grow best in well-tilled soil without compaction or other root-restricting layers.

Scheduling tools:
Depending on geographical region, a variety of tools are available to simplify irrigation scheduling for growers. These tools include online scheduling tools such as USDA’s IrrigatorPro (http://irrigatorpro.org/farm/) and University of Florida’s Peanut FARM (http://peanutfarm.org/). While such tools can provide a respectable return at little cost, soil sensors that detect soil/water ratio are recommended. In Georgia irrigation trials, soil sensors consistently have provided maximum yields (University of Georgia Peanut Extension Team). These trials spannedfrom 2014-2016, including years with both insufficient and abundant rainfall. Whether producers choose the most precise, cutting-edge methods of irrigation scheduling or simply irrigate based on environmental observation and known crop data, production outcomes generally will outperform unirrigated acres.
"Irrigation helps you get a better grade and increases your yield. It removes your drought risk and also makes your land more valuable.”
~ Henry Bamberg, South Carolina peanut producer