Subscribe to our email newsletter!
Potato Growth Cycle and Water Stress
Because potatoes have shallow roots with a majority of active roots in the top 12 inches, light, frequent irrigation runs are needed to provide consistent moisture (King & Stark, 1997). The top foot of soil dries faster than soil at lower depths, particularly in coarse-textured or sandy soils.
​
Like any crop, potato requires more irrigation during key growth periods. If water supply is limited, growers should use most of it from tuber initiation to mid-bulking. Tuber initiation occurs between 50 to 70 days after planting, depending on potato variety and site-specific conditions. Tuberization, or tuber formation, then occurs during the next 10 to 14 days. Tuber bulking then takes another 30 to 60 days. The potato plant’s water use reaches a maximum at mid-bulking (King & Stark, 1997).

“People tend to overirrigate in the spring,” said Washington State University Extension Irrigation Specialist Troy Peters, Ph.D. “Early plant water use rates are a quarter to a half of what they are in the summer. In May and early June, irrigation can be off some of the time; but in June and July, it needs to run all the time.”
Tuber Defects Caused by Water Stress
If water stress occurs during tuber initiation and early tuber development, quality will suffer, with many tubers being rough and misshapen. Water stress during bulking should not cause quality issues, but it will reduce yields, resulting in smaller potatoes. If possible, soil water content should be monitored until harvest. Black spot bruise can occur when tubers are dehydrated at harvest. On the flip side, tubers that are turgid at harvest are susceptible to shatter bruise and thumbnail cracking.

Growing potatoes with deficit irrigation results in yield loss. Research conducted over a 20-year period at the University of Idaho’s Aberdeen Research and Extension Center showed that Russet Burbank yields decline 20 to 25 cwt (1 cwt equals a hundred pounds) per acre for every inch
of crop water use reduction, due to water stress during the tuber bulking growth stage (King, Stark & Love, 2004).

It is also important to note excess soil water at nearly any phase can be detrimental. At planting, it can cause seed decay and/or delayed emergence due to low soil temperature. During vegetative growth and tuber initiation, overwatering can cause brown center and hollow heart. Excess soil water later in growth cycle can lead to tuber storage problems.

Despite the problems that occur with overwatering, researchers at the University of Idaho found “irrigation is required for profitable commercial potato production in Idaho” (King & Stark, 1997). The key is to keep soil water content within the required range.

Irrigation Scheduling
The goal of irrigation scheduling is to estimate the amount of available water in the crop root zone and irrigate to prevent available soil water (ASW) depletion, thus preventing the crop from experiencing water stress. Soil texture and water-holding capacity as well as crop rooting depth
affect the amount of water available to the plant.

To keep the soil moisture within an acceptable range, growers must replace water that is evaporated from the soil and transpired by the plant, or ET. Irrigation scheduling can be compared to a checkbook with rainfall and irrigation representing deposits and ET being a daily withdrawal (Melvin & Yonts, 2009). Like other weather data, ET is forecasted to help growers predict and schedule irrigation. ET data can be obtained from a
subscription service and from local media in some areas.

“Irrigating the right amount at the right time is really important,” Peters said. “Soil moisture sensors are the best way to maintain the correct moisture balance, but for those who don’t have the money, there are free ET tools that will get them 90% of the way there — it just takes time
and attention.”

Potato crops in southeast and southcentral Idaho require about 18 to 23 inches of water throughout the growing season to reach maximum yield. In southwest Iowa, the average irrigation totals are about three inches more due to a longer growing season. The peak daily crop water use is
.31 to .34 inches (King, Stark & Love, 2004).

For Russet Burbank potatoes, ASW in the active root zone (12 to 18 inches) should be maintained between 65% and 85% throughout the active growth period (King & Stark, 2007). Maintaining ASW at anything less than 65% is considered deficit irrigation. Other potato varieties may be more tolerant of deficit irrigation. Russet Norkotah, Shepody, Ranger Russet and many red varieties have been shown to be more drought-tolerant than other potato varieties (King, Stark & Love, 2004).

When using a deficit irrigation strategy, ASW should not drop below 55% during vegetative growth. During tuber initiation and early bulking, water stress should be reduced or eliminated. ASW should not drop below 50% prior to vine kill (the last growth stage when potatoes vines wilt.) Tubers continue to grow after vine kill, although their growth rate slows. Tubers should not remain in dry soil for extended periods and should be harvested soon after reaching maturity. ASW of less than 60% is considered dry soil. If growers are allowing potatoes to mature in dry soil, they should irrigate approximately seven to 10 days before harvest to rehydrate tubers. If soil water content is above 60%, a final irrigation run two or three days before harvest is sufficient (King, Stark & Love, 2004). 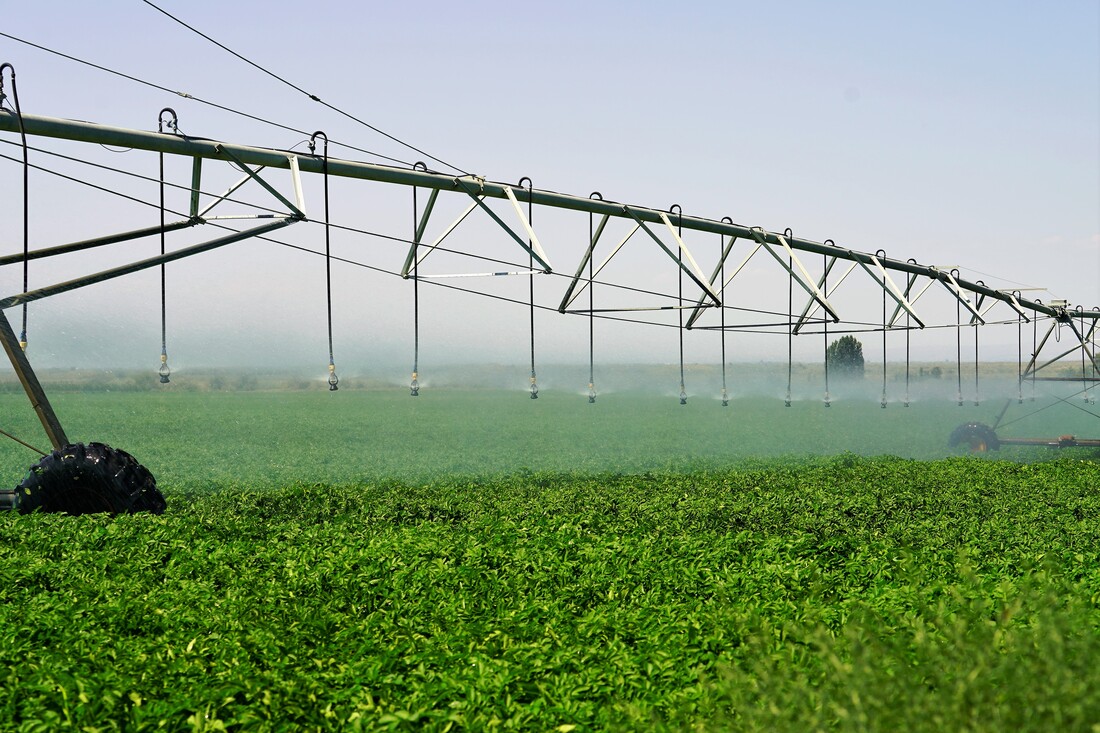 Center pivot systems are a good choice because they generally have one of the lowest per-acre installation costs, are easy to operate and are energy efficient because they operate at low pressure. A Reinke Dealer can recommend custom irrigation solutions such as sprinkler packages,
soil moisture sensors and variable rate irrigation. ReinCloud®, Reinke’s remote monitoring system, allows growers to see real-time sensor data and control pivots from a smartphone, tablet or computer.

“Center pivots are the most efficient way to irrigate potatoes in Washington,” said Erik Skone, owner of Skone Irrigation in Pasco, Washington. “Washington state has one of the highest minimum wages in the country, so just considering the savings on labor alone, it’s worth it. A center pivot with a swing arm corner can irrigate just as well as a linear move system, but with less labor involved. The water patterns under the new Reinke ESAC are phenomenal — they look almost exactly like the water patterns under the parent machine.”
References
King, B. & Stark, J. (1997). Potato irrigation management. University of Idaho Extension Publications.