Subscribe to our email newsletter!
​Advanced irrigation technology provides precision water application that contributes to high yields. An understanding of when to irrigate and what variables affect irrigation management decisions coupled with real-time field data, help growers make the most of their investments in irrigation.

Troy Ingram, Irrigated Cropping Systems Extension educator with University of Nebraska, works with soybean growers in central Nebraska. He recommends using a soil moisture sensor for precise irrigation scheduling. “If you know how much water is in the soil and how much the crop is using each day with the ET (evapotranspiration) number, then you can do a really good job of
scheduling irrigation for whatever crop you’re irrigating,” Ingram said. Evapotranspiration (ET) is a measure of how much water is evaporated from the soil and transpired by the plant.
Soybean Growth Stages and Water Stress
With soybeans, in particular, it’s important to understand the plant’s growth stages and its water usage at each stage. Research by Kranz and Specht (2012) in Nebraska points to success with stage-of-growth irrigation scheduling. This approach works only with medium to fine-textured soils. A soil moisture sensor can be valuable when using this scheduling method to determine if the soil water reservoir is sufficient at planting time.

Water use peaks during pod development and seed fill. Soybean plants also are more susceptible to water stress, which leads to yield loss, during these stages. 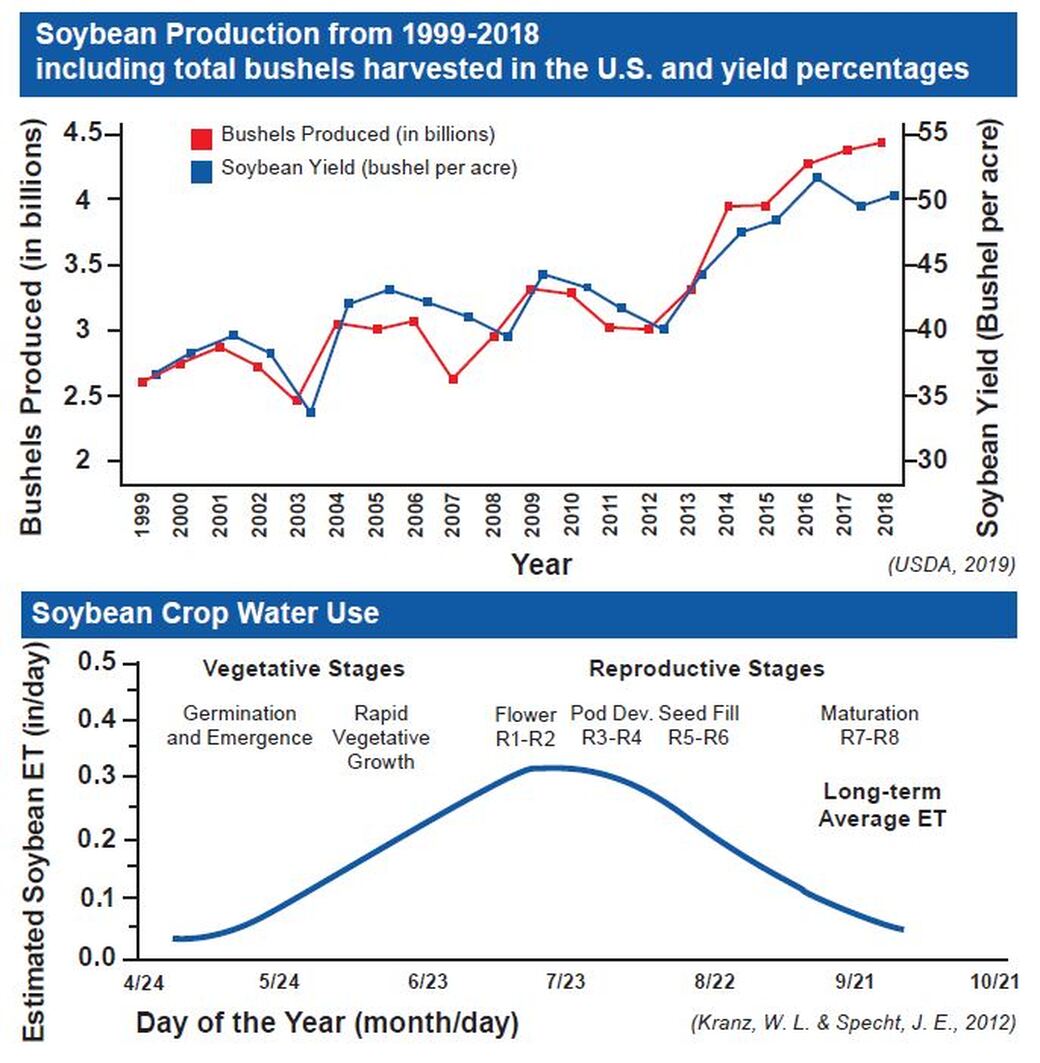 ​Crop root zone depth also effects irrigation decisions. Although soybean roots can reach depths of 5 to 6 feet, irrigation penetration should end at 3 feet, because the largest concentration of roots and the majority of soil water extraction occur in the top 2 to 3 feet of the soil profile (Kranz & Specht, 2012).

Coarse-textured soils include fine sands, loamy sands and fine sandy loams. These soils generally have an available water-holding capacity of less than 1.5 inches per foot. Light, frequent water applications of .75 to 1 inch are needed to refill the limited soil water reservoir. The maximum allowable water depletion for sandy soils is 50% (Kranz & Specht, 2012). Irrigation depth should be 2 feet during vegetative growth stages and
flowering, then increase to 3 feet in the later reproductive stages of pod development and seed fill.

Water depletion data can be collected easily from soil moisture sensors. Or, it can be estimated with careful tracking of ET data, rainfall, and irrigation. ET data can be obtained from a subscription service or local media. ET numbers will change depending on plant development and weather variables such as solar radiation, wind, air temperature and humidity. Soybean’s total ET, or water use, ranges from 20 to 26 inches during the growing season (Kranz & Specht, 2012).

With medium-to-fine-textured soils, growers may be able to irrigate less using stage-of-growth irrigation scheduling. This method delays irrigation until pod development and requires heavier water applications. Delayed irrigation may reduce yields when compared to full-season irrigation
scheduling if stored soil water is not  sufficient at planting, or if rainfall is severely deficient prior to pod development (Kranz & Specht, 2012).
However, if growers are limited in the amount of water they can apply during the growing season, they will reap the maximum benefit from applying water during pod development and seed fill.
Recommended Irrigation Systems
Whether soybean growers choose fullseason irrigation or delay irrigation until pod development, production outcomes will be significantly greater than unirrigated fields (Kranz & Specht, 2012).

Center pivot systems are a good choice because they generally have one of the lowest per-acre installation costs, are easy to operate and are energy efficient because they operate at low pressure.

Reinke irrigation systems are customizable, and sprinkler packages
can be optimized for light or heavy applications. In addition, Reinke provides a variety of VRI solutions for all kinds of budgets.